Marketing involves thinking into the box...

There is a link between Art and Business - the processes of realizing an artwork and a product are very similar. Below are a couple of business related articles written for Technorati.com (situated underneath all this product placement nonsense - actually it is SEO). These processes are like a woven web (no pun intended).

North Devon Web are based in North Devon, (UK) – we provide a web site updating service. North Devon Web Design will update your site, even if we didn’t design it in the first place. There is nothing worse than a web site that contains out of date information…this gives the buying public the wrong impression.

North Devon Web belongs to a network of websites that host in a green way.

Horoscopes in newspapers are based on star signs and birth dates; these predict the day’s events. These predictions are based on the laws of probability and chance. You could read your daily horoscope and make the prediction into a self-fulfilling prophecy, you could go out and find that ‘Tall dark handsome man’ or go on ‘A long journey’. Alternatively you could read your horoscope late in the evening and interpret the day’s events and adapt them to the mystical words. “Yes I did meet someone important today”. The interesting thing about prediction is that you could meet a tall dark handsome man, go on a long journey and meet someone important and never read your horoscope. Does this mean the day’s events were not predicted? Similarly these rules can apply to system-based art and painting.

Title: ‘Self Portrait in Red’

The image above is a proposal for a painting whose width is 20 metres and is derived from the source material below. Costs to produce approximately £10,000 to £12,500.

The billboards around Cuba proclaim Revolution; the heroic gestures of Cuban heroes symbolize the power of Revolution. Cuba is still in a politicized state of revolution, a religion of the state. Che looks like Christ. 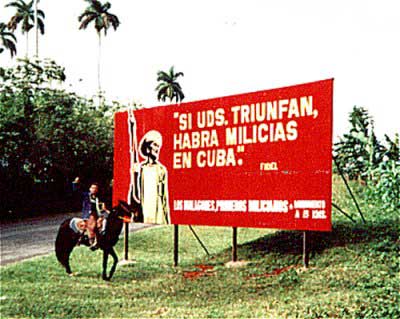