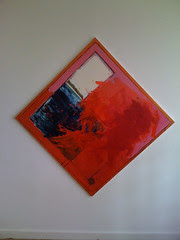 Inspired by a cliff walk with one of Robert Rauschenberg’s assistants in 1978. The implications of this encounter still roll around in my brain. ‘Walk Away or Jump’. This was possibly one of the major turning points in my life – what did I turn down? Fame, fortune?

"In 1969 Robert Rauschenberg was invited by NASA to witness the lift-off of Apollo 11 at Kennedy Space Center and to use this theme in his work. He created a series of lithographs celebrating the astonishing achievements of the United States NASA Apollo Mission to the Moon. The Stoned Moon series was actually a double pun – the image of this historically groundbreaking event being put on lithographic stones and the feeling of being ’stoned’ metaphorically on one of the most important events in the history of man." (from original url: www.orbit.zkm.de/?q=node/277 )

This series of lithographs were (and still are) a massive influence on my painting, printing and music. Images (sound) that is arbitrarily spliced together in an apparent random manor, will when juxtaposed against each other create a narrative. This meshing together of unrelated imagery may appear to be arbitrary but the intellectual decision making that goes with the process is absolutely phenomenal .

This apparently random approach to art is possibly how search engines, SEO and optimization works.
Posted by Unknown at 07:25