A break from work - Ultravox! 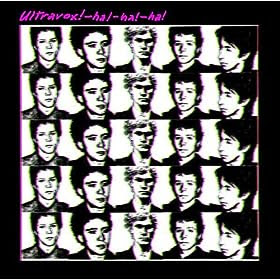 Do you ever think what the heck am I going to listen toooo now. Crunching code and creating web pages sometimes gives you a headache. I couldn't think of anything new I wanted to wash my brain out with, then I remembered an album from 1977 (or 78) called Ha! Ha! Ha! by 'Ultravox!'. Now before you panic the vocalist on this early album is John Foxx and not Midge Ure. This album is so very different to the Ultravox of the 1980's. Worthy of listening to -
Despite being dropped by their record label at the beginning of 1979, Ultravox undertook a self-financed tour of the United States in February, which was successful in terms of crowd enthusiasm and ticket sales. During the tour, the band performed two new songs, "Touch and Go", which Foxx later recorded for Metamatic, and "Radio Beach", which was never recorded in the studio.
The band came to a parting of the ways during the tour, Robin Simon deciding to stay on in New York and Foxx announcing his plan to go solo upon returning to England. Without a lead singer, the band went into hiatus, Billy Currie joining Gary Numan's touring band and contributing to his highly successful 1979 album, The Pleasure Principle.  The burgeoning popularity of synthesizer music at this time, and Numan's oft-quoted praise for the Foxx-fronted lineup and song-output of Ultravox, helped revive interest in the band. Billy Currie rejoined the group, while John Foxx was replaced as lead vocalist by Midge Ure, of The Rich Kids, Slik and Thin Lizzy. Ultravox then built on some of the ideas explored on Systems of Romance, achieving huge worldwide success with the album Vienna in 1980, after which the band released a series of popular albums and singles. Midge Ure was active in organizing, and Ultravox performed at, Live Aid in 1985, and at subsequent Live Aid events. This Ultravox lineup lasted another nine years , overshadowing Foxx's concurrent solo career.
John Foxx. (2010, July 6). In Wikipedia, The Free Encyclopedia. Retrieved 06:28, July 30, 2010, from http://en.wikipedia.org/w/index.php?title=John_Foxx&oldid=372085144