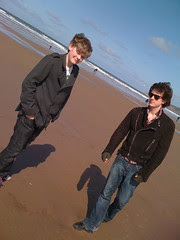 Sometimes the words just flow and copy just appears on the page. We can create pages using different methods of creation: by phone, laptop, computer etc. Each method of delivery has a different way of understanding  grammar and spelling, making suggestions for words and sentence construction. This can be seen as a useful tool for page or text creation. Sometimes it can be extremely irritating, incorrectly correcting words, making sentences meaningless.
This is a Disclaimer
This text is subject to prescriptive/predictive rules of a system aesthetic. This text has been written on five computers, three of which are on a network and two of which are stand-alone systems. Four computers are running different versions of a Windows operating systems, (Windows 95, Windows 98, Windows ME and Windows XP) and one is using Linux. The text is written in Microsoft Word, three are using version 2000 and one is version 97. Three versions are operating with an English dictionary and one (v.2000) is using an American/English dictionary. The Linux machine is using OpenOffice.org. This text has been written in several locations including, Bromsgrove, Wolverhampton and Woolacombe. This text has been subject to 100’s of system protocols, however the structure of the text is predictable; each computer has its own subtle nuances and offers syntax and grammatical recommendations. I am not completely responsible for this text. My main contribution is editing and using the cut and paste facility. If I had attempted to write this in its finished running order, it would have taken me longer to write…my spelling is appalling and my grasp of grammar is minimal…the written word is not my preferred method of expression. This text would not exist without the existence a system. The aesthetics of the system is responsible for the proliferation of the written word; this is a double-edged sword.
Posted by Unknown at 08:24