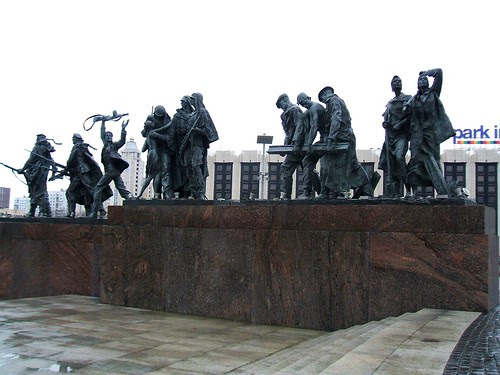 Creating new websites is an exciting process but - how long does it take before the enthusiasm wears off and your site becomes a chore or you feel held to ransom by it? Isolated you feel the whole world is against you and the emails with positive leads get less and less and your inbox gets cluttered with SEO companies (I use the term very loosely - many of them are just charlatans simply out to steal your cash) promising page one Google listing and keyword domination. Bullshit. Look back into the history books and find accounts of survival and victory over wars of attrition, then apply the solution to your entrenchment.
The photograph is of the Monument to the Heroic Defenders of Leningrad. This powerful and impressive monument, which is both above ground and below ground, was built as the focal point of Ploshchad Pobedy (Victory Square) in the early 1970s to commemorate the heroic efforts of the residents of Leningrad and the soldiers on the Leningrad Front to the repel the Nazis in the 900-day Siege of Leningrad during World War II. The Siege of Leningrad was one of the longest, most destructive, and most lethal sieges of major cities in modern history. It isolated the city from almost all supply routes, except those provided by the ‘Road of Life’ across the frozen Lake Ladoga. More than a million civilians died, mainly from starvation.
It is fair to say that the strife of feeling held to siege by your web site - dealing with all the comment spam with its sneaky tactics "You have a great blog here I can't wait to read your next post" is nothing in comparison to the harsh reality of war.  Learn from history, dig in and plot a counter offensive.
Posted by Unknown at 06:30