#WordPress app - too twitchy to blog with

Checking your stats from your android mobile phone can't be a bad thing - can it?


The WordPress app is a handy little tool, the stats data you see is the same data you see when at your blog’s web dashboard. This includes 'Views by Country' and 'Top Posts & Pages'. If your blog is a self-hosted blog you can enable the stats in the app by installing the free Jetpack plugin into your web dashboard.

The WordPress app has traditionally been a twitchy thing and unfortunately it still is when using some blog templates - images disappear and code becomes meaningless spaghetti.

The best use for this app is as an optimizing tool, using the stat capability. If you want to post something on the go then just use the text fields and ignore inserting media. Having tested this app on an iPhone and a Sony Xperia, the android version appeared to work better.

Android is a Linux-based operating system designed primarily for touchscreen mobile devices such as smartphones and tablet computers. It is currently developed by Google in conjunction with the Open Handset Alliance. Initially developed by Android Inc, whom Google financially backed and later purchased in 2005, Android was unveiled in 2007 along with the founding of the Open Handset Alliance, a consortium of 86 hardware, software, and telecommunication companies devoted to advancing open standards for mobile devices.

The painting at the bottom of the stairs = via PeterBright.info 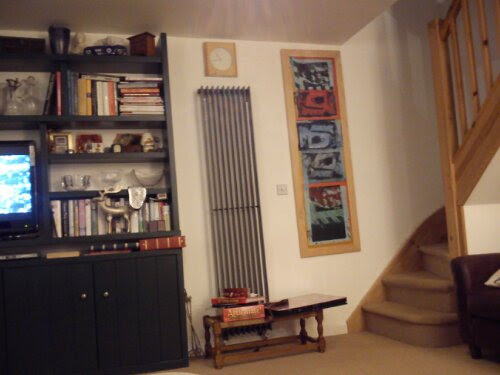 My iPhone died and I decided it was time to try another phone. I am now an android. This photo and post was created using the WordPress app.