Music to optimise by

Clifford T. Ward: 10 February 1944 - 18 December 2001
In 1968, following the demise of The Secrets, Ward decided he needed to get a 'real job', and so spent the following three years at a teacher training college, ultimately finding employment at nearby North Bromsgrove High School, teaching English and drama. One of his pupils was the future wife of Sting, Trudie Styler. The children heard singing on Ward's early albums were from North Bromsgrove High School. In his spare time, he continued songwriting and recorded his first solo album Singer Songwriter.
His first album, Singer Songwriter, was released in 1972 on Dandelion Records (a label formed by the late disc jockey John Peel) just before it went into liquidation. As a result, the album received little media coverage and went largely unnoticed. Signing a new recording contract with Charisma Records, Ward went on to have a hit with the single "Gaye". It sold over a million copies worldwide and reached number 8 in the UK Singles Chart in July 1973.
In July 1973, following the success of "Gaye", Ward's second album Home Thoughts achieved healthy sales and reached number 40 in the UK Albums Chart. At this point, wanting to concentrate on music full time, he gave up the teaching profession. He made a rare public appearance in August, performing "Gaye" on Top of the Pops. In January 1974 Ward entered the singles chart again at number 37 with "Scullery", a track from his third album Mantle Pieces. 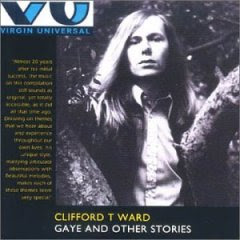 Clifford T Ward,  was my English teacher (which explains a lot). He was a singer songwriter who had a 'chart' sucess with 'Gaye

' - the story was that she was a pupil in my class (she was also a girlfriend of mine). His English lessons were spent writing requests to 'radio one' DJs - Tony Blackburn et al. There is a bit more about how CTW influenced me here. He was a nice bloke (but a crap teacher) and his lyrics were very poetic I think I will listen to him again.
Alms – Sane

How good is this track!!!! – Listen to more tracks by Alms at Myspace Music Alms early mix DEMOS NOW UP – gigs a’plently a’coming in run up to launch of the mastered first EP