Over the past few decades, the use of increasingly explicit sexual imagery in consumer-oriented print, TV and Internet advertising has become almost commonplace. This is not a new phenomenon, the female form has been used to sell products and services ever since man invented 'the market place'. Sexuality is considered one of the most powerful tools of marketing and particularly advertising. Post-advertising sales response studies have shown it can be very effective for attracting immediate interest but are we becoming immune to sexy ads and are these adverts becoming impotent?
Art and SEO Pornography - Sex sells but is it acceptable? Read more...
Below is taken from: PeterBright.info 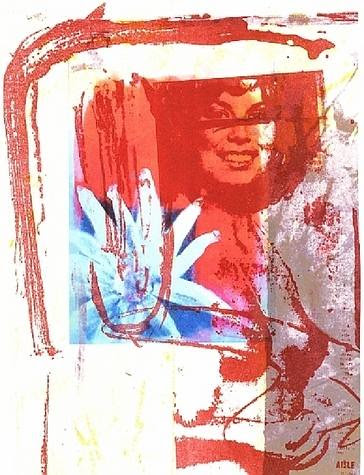 This image is a version of a lithograph I did in 1978. To download it (high resolution) click on the image. This print was manipulated using Photoshop in 2002 and exhibited in 2004. The original lithograph, which is framed and signed is for sale at £85.00. If you want to buy it contact me.
If you download it, print it off and then mail it to me I will sign it and return it if you send me the postage costs.
Background info: 1978: I once had a girlfriend called Anne who wore ‘Charlie’ perfume. Every time we came close I sneezed.  I was allergic to her bottled smell…

During the 1980‘s I was involved with the Mail Art scene. Mail art is a worldwide cultural movement that began in the early 1960‘s and involves sending visual art (but also music, sound art, poetry, etc.) through the international postal system. Mail Art is also known as Postal Art or Correspondence Art. The term networking is often used to describe Mail Art activities, based on the principles of barter and equal one-to-one collaboration.

After a peak in popularity in the late 1980‘s and early 1990‘s, the Mail Art phenomenon has gradually migrated to the Internet, whose “social networks” were largely anticipated and predicted by the interactive processes of postal collaborations. Nevertheless, Mail Art is still practiced in the new Millennium by a loose planetary community involving thousands of mailartists from the most varied backgrounds.

Q U O T E : “The perfect conduit for This Window’s music and art was the Cassette Culture and Mail Art scenes. These networks of artists and musicians encouraged an early form of open source cooperation, with projects being shared and created. This methodology fitted in with This Window’s approach to creativity.”