Morgue Studio is in the top 10 blogs for Arts in the Technorati.com charts! “Whatever Happened to the Space Age” Media: Painting and Screen Print on canvas, signed and dated 2011. Size: 400mm x 400mm. Deep box canvas … Continue reading → 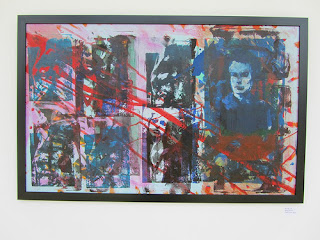 Notes on Painting:
The act of being creative is a love hate thing – The Beauty and The Beast someone fetch a priest (ref. David Bowie)
Beauty and the Beast (French: La Belle et la Bête) is a traditional fairy tale. The first published version of the fairy tale was a rendition by Gabrielle-Suzanne Barbot de Villeneuve, published in La jeune américaine, et les contes marins in 1740. The best-known written version was an abridgement of her work published in 1756 by Jeanne-Marie Le Prince de Beaumont, in Magasin des enfants, ou dialogues entre une sage gouvernante et plusieurs de ses élèves; an English translation appeared in 1757. The tale has perhaps been made most recently famous by the retelling in the 1991 Disney film. In Wikipedia, The Free Encyclopedia. liberated 12:47, April 7, 2011, from: http://en.wikipedia.org/w/index.php?title=Beauty_and_the_Beast&oldid=422255721
Posted by Unknown at 23:23