Whatever Happened to the Space Age

Original painting by Peter Bright.
Media: Painting and Screen Print on canvas, signed and dated 2011.
Size: 500mm x 400mm
Buy here…
ARTIST + S T A T E M E N T …
As an 11 year old I watched the first moon landing in 1969. I was mad about everything to do with space travel, I would read anything that was about rockets, cosmonauts and astronauts. Later in my life I shook the hand of a man who shook the hand of my all time hero Yuri Alekseyevich Gagarin, that was for me like touching history, if only secondhand (excuse the pun).
Nancy Spungen left home at age 17 and moved to New York City. She worked as a stripper around Times Square (and allegedly at a brothel as well). She followed bands such as Aerosmith, The New York Dolls and The Ramones. In 1977, she moved to London and met The Sex Pistols. When lead singer Johnny Rotten did not show interest in her, she pursued bassist Sid Vicious and they soon moved in together. 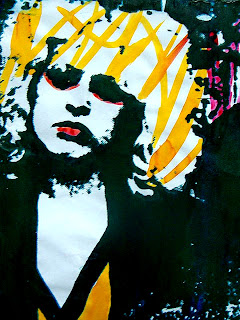