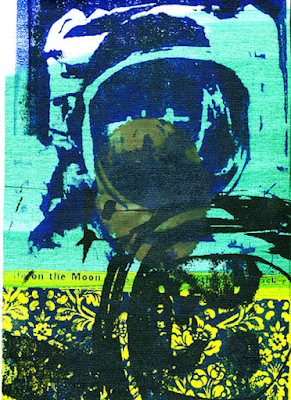 Rediscovering the printing process after nearly 40 years has been an interesting process ~ disappointingly modern inks are not as rich in colour (earthy colours are very plastic like) and modern water-based inks don’t become part of the surface, they sit on it, which is incredibly frustrating ~ the reason I took up printing in the first place was because of the absorbed flatness of the pigments.

Printing is a process for reproducing text and images, typically with ink on paper using a printing press. It is often carried out as a large-scale industrial process, and is an essential part of publishing and transaction printing.
The development of printing was preceded by the use of cylinder seals in Mesopotamia developed in 3500 B.C., and other related stamp seals. The earliest form of printing was woodblock printing, with existing examples from China dating to before 220 A.D. and Egypt to the fourth century. Later developments in printing include the movable type, first developed by Bi Sheng in China, and the printing press, a more efficient printing process for western languages with their more limited alphabets, developed by Johannes Gutenberg in the fifteenth century.
Email Post
Labels: business
Location: Barnstaple, Devon, UK